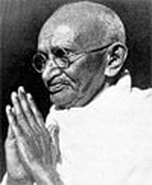 Two synergistic approaches are required. Neither alone will achieve this grand vision. The first approach Gandhi called "Constructive Program." Through good works of peace education, peace making, peace keeping, and peace building we lay the ground for living in a warless future. We shift our cultures from a war mentality to a peace mentality and give people the tools to live in peace.

The second, equally important and synergistic approach is called "Obstructive Program." Here is how, using the strategy and tactics of nonviolent direct action, we take the war industry apart piece-by-piece.  ​ 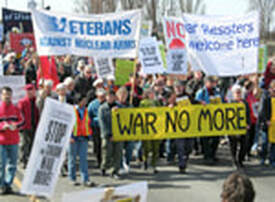 The essay, "To Abolish War," compares Constructive and Obstructive approaches, explaining the necessary contributions of each. The essay also: Legions of organizations and institutions around the globe are dedicated to a variety of Constructive Programs.But so far, the world does not have many Obstructive Programs, let alone a united, mobilized one
aimed at the war industry.

We've taken only initial steps to end war (e.g., founding the United Nations, establishment of the International Court of Justice, actions directed at eliminating nuclear weapons, and treaties against the use of landmines and cluster munitions). But AFWW believes the time is right for the global community to unite in a way that will create an unstoppable movement to overcome all forces---financial and political---supporting the continuation of war. See "Shaping the Future."

The great pioneers of nonviolent social transformation succeeded by skillful--- even masterful---use of the principle of lever and fulcrum. Each analyzed the nature of the beast to be defeated, they found its weak points (the fulcrums), and they mobilized people power (their lever) to apply pressure to the weak point.

The war machine, which functions primarily as a massive money-maker for the few and a job creator for multitudes, is not simply going to fall apart because a great many people want it to. Too much money and power is invested in it. Prayers alone will not do it. Peacebuilding, peace-education, and peacemaking alone or in combination will not do it. 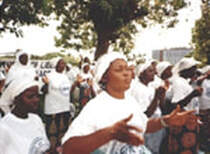 When a critical mass of citizens decide that a war must end and they are determined to make it happen no matter what the cost to themselves, then that war will end.

For example, after a brutal eight-year war that included mayhem and rape, the women of Liberia had had enough. Christian and Muslim women, who previously had not had much to do with each other, united in common cause---to force the warring factions to make peace. The article "Liberian Women Demand and Get Peace!" describes how they used nonviolence and persistence to achieve their goal. An award-winning film, "Pray the Devil Back to Hell," documents details of their efforts. 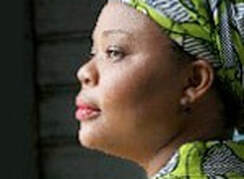 ​In 2011, one of the most prominent women energizing the effort, Leymah Gebowee, won the Nobel Peace Prize, along with the woman who subsequently became Liberia's president, Ellen Johnson Sirleaf, and Tawakul Karman, an activist from Yemen.  Ending a war can be done. Ending war itself can also be done...when a critical mass of global citizens decide that enough is enough.

AFWW sees the nucleus for a global ending-war movement in the activities of the Nobel Women's Initiative. In late October 2010 they led a delegation to Palestine and Israel, seeking to support women in both communities who want to end the seemingly endless conflict there.

This month, from January 19-24, they send a delegation to Liberia to meet with grassroots women leaders who are playing an important role in the challenging work of maturing and maintaining their hard-won peace. You can read about the Nobel Women's delegation to Liberia here, and check out their activities on Facebook.

While their current major focus is on ending violence against women in conflict situations, I foresee a time when the Nobel Women's Initiative partners with a great many organizations around the globe in beginning the campaign to free us from all war, freeing women, children and all of us from behavior that has absolutely become obsolete. Enough is enough! 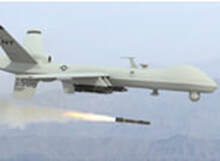 Arguably, drone warfare is not honorable. Because it poses no risk whatsoever to the user, it is fundamentally cowardly, not heroic. Moreover, by hovering overhead interminably and raining death from the sky on innocents, it is a weapon of terror.  The use of robotic killer drones, like war itself, is a deeply immoral act. The reason AFWW has chosen to focus on this weak link (fulcrum) of the war machine is that, if there is something our species does not need, it is yet another new way to kill each other. Humanity needs to embrace the goal of ending war, not the goal of creating new ways to wage war. Using drones by the United States executive against US citizens is certainly contrary to the US Constitution. Using drones in other countries as a method of targeted assassination is contrary to international law. In a recent decision upholding the Obama administration's use of drones in targeted assassinations, district judge Colleen McMahon expressed deep concerns about the existence of a secretive government program that assassinates those deemed to be enemies of the US, but does so without judicial oversight. She wrote: "I can find no way around the thicket of laws and precedents that effectively allow the executive branch of our government to proclaim as perfectly lawful certain actions that seem on their face incompatible with our Constitution and laws." 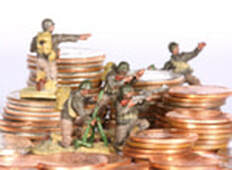 But for the war industry there is money to be made. And by the twisted logic of dropping an atomic bomb on Hiroshima and Nagasaki in order to "save a great many lives" (the argument always used to justify this horrific act), robotic killers can be sold to any citizenry as being simply a wonderful new edition to our killing arsenals because fewer lives are lost than in a vicious ground war. Thus the global powers-that-be embrace killing and money-making as just part of life as usual, a new way to make war for the future, and the global citizenry appears poised to accept this.

But perhaps not.  Perhaps the times they are a'changin'. Protests, both legal and at the grass roots, against killer drones are gaining momentum. Perhaps a global ethos that rejects war begins to emerge. AFWW is involved in supporting one such action in early April. You and/or your organization might want to participate.

Related resources
Books: Ethicist Peter W. Singer's Wired for War: The Robotics Revolution and Conflict in the 21st Century.  It explores how science fiction has started to play out on modern day battlefields, with robots used more and more in war.
Activist Medea Benjamin's Drone Warfare: Killing by Remote Control.
Films:
The Drone Landscape
The Drone Economy
The Drone Morality

An essay entitled "To Date, Nonviolence Movements Were 'Before Their Time.' Now They Are Poised to Change History" explains why the human community is poised to make a stunning, historical paradigm shift in worldview every bit as large as the Agricultural and Industrial Revolutions. We are, in fact, already in the throes of such a "Great Turning." The only question is where we will end up. Can we shape a future we desire or must we simply blunder forward and hope for the best?

The essay suggests that we can consciously create a shift from cultures steeped in violence at every level to ones that embrace nonviolence....which would include putting an end to that  great violence which is war. And that to do so, we must use nonviolent means. Among other things, the essay explores:Read the full essay

We want to provide newsletter readers with a reminder about our extensive website,  www.afww.org. The materials can be a reference for personal use, something to share with friends or colleagues who doubt that it would ever be possible to abolish war, and as thought pieces to stimulate discussions, for example, by your students, a book group, or peace activist organizations. You will find on the site:
These are titles of and links to current Miscellaneous AFWW Essays