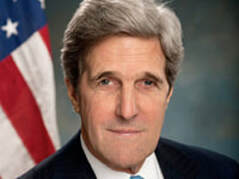 U.S Secretary of State, John Kerry
​John Kerry on the Critical Role for Women in Building a Lasting Peace System

The essential, necessary role women must play in building lasting peace could not be better explained than by US Senator John Kerry.  His Op-Ed piece for the DipNotes Blog in May 2014 is given here in full.

International Women's Day is more than a moment marked on a calendar. It is a day not just to renew our determination to make the world a more peaceful and prosperous place - but to recognize that a world where opportunities for women grow, is a world where the possibilities for peace, prosperity, and stability grow even more.

I see it every single day as Secretary of State. Even as the Assad regime's barrel-bombing of Aleppo continues, showing the world a brutal regime's true colors, with every act of courage and perseverance, Syria's women show the world their true colors as well. We heard from some of these remarkable women in Montreux just last month.

Their stories spoke to the bravery of countless other Syrian women. One woman from Idlib worked with the Free Syrian Army to ensure that the people of her village could remain in their homes and till their own land.  Another woman from Aleppo got restrictions on humanitarian access lifted by offering food to regime soldiers at the checkpoints. If that isn't courage under fire, I don't know what is.

It's not just in Syria that women offer us hope for resolution to conflict. Women are vital to our shared goals of prosperity, stability and peace. That's as true when it comes to ending our battles as it is jumpstarting our economies. The fact is that women bear the greatest burden in war. But their voices are too rarely heard in negotiating peace.

That has to change.

Countries that value and empower women to participate fully in decision-making are more stable, prosperous, and secure.  The opposite is also true. When women are excluded from negotiations, the peace that follows is more tenuous.  Trust is eroded, and human rights and accountability are often ignored.

In too many countries, treaties are designed by combatants for combatants.  It should come as no surprise, then, that more than half of all peace agreements fail within the first 10 years of signature. The inclusion of women in peace building and conflict prevention can reverse that trend.

So how do we get there?

Evidence from around the world has shown that deadly conflicts are more likely to be prevented, and peace best forged and protected, when women are included as equal partners.

That's why we are working to support women in conflict and post-conflict areas around the world.

In Afghanistan we are advocating for the inclusion and election of women at all levels of governance.  Afghan women today are marching forward in ways unimaginable just 10 years ago. They're starting companies.  They're serving as members of parliament. They're teaching in schools and working as doctors and nurses. They are the foundation upon which Afghanistan's future is being built.

As the people of Burma work to resolve the conflict that has plagued their nation for decades, the United States is supporting the meaningful participation of women in the peace process and inter-communal peace initiatives.

We know that the security of women is essential to their participation in peace building.  That's why we are working to ensure women get equal access to humanitarian assistance and relief, wherever we work.

The United States is also leading by example. My sister has worked for many years at the United Nations, following in the State Department footsteps of our father many years before I did myself. She's a trailblazer. But she's not alone. It's no coincidence that some  of our top diplomats and peace negotiators are women - from National Security Advisor Susan Rice, to U.S. Ambassador to the United Nations Samantha Power, to Deputy Secretary of State Heather Higginbottom, to Undersecretary of State for Political Affairs Wendy Sherman. Today, all but one of the State Department's Regional Assistant Secretaries are women.

We celebrate their accomplishments not just because they are women, but because their work around the world will make all people - men and women, boys and girls - more secure.

Peace is not the absence of conflict. It is the presence of every member of society working together to promote stability and prosperity.

No country can succeed unless every citizen is empowered to contribute to its future. And no peace can endure if women are not afforded a central role. So today, we mark the miles women have traveled around the world - but more importantly we commit to the next miles of the journey. 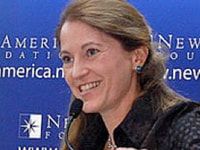 In an online article for Truthout in October 2008 Lorelei Kelly, a civic technologist based in Washington D.C. and involved with the project "Resilient Democracy," addressed the topic of Women and National Security, saying that "women must define the priorities debate." She makes the link between traditional "women's issues," which center around creating stable and safe communities by tending to such things as health care, education, clean water, and economic justice, and what needs to be done to create a stable and safe world. Here are some quotes to give you a sense of the article:

"The world has changed significantly, and America must make different choices about how to secure our future."
"The United States ranks 69th in the world in Congressional female representation. That's below both Afghanistan and Iraq...."
"The old 'guns versus butter' line is obsolete."
"The U.S. Army considers girls' education a vital link to achieving long-term stability."
"Whether the field of action is within our borders or abroad, national security today demands a broad understanding of what constitute making and defending the peace."

You can read the entire article here.  Hers is just one of thousands of articles and books published within the last ten years pointing the way to a more peaceful, just, sustainable future for our descendants that will rely on the empowerment of women.

We want to provide newsletter readers with a reminder about our extensive website,  www.afww.org. The materials can be a reference for personal use, something to share with friends or colleagues who doubt that it would ever be possible to abolish war, and as thought pieces to stimulate discussions, for example, by your students, a book group, or peace activist organizations. You will find on the site: These are titles of and links to current Miscellaneous AFWW Essays