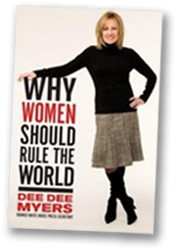 Dee Dee Myers - Harper Collins, 2008
A lot of people on this planet say they long for a more just, less violent, and more ecologically sustainable future. If that's the goal, women are humanity's greatest untapped resource. To that end, we need many more books like the one Dee Dee Myers, former press secretary to U.S. President Bill Clinton, has crafted.

Why Women Should Rule the World is a delightful and occasionally uncomfortable exploration of male/female differences, especially as they relate to women in leadership roles. As the author points out, men and women are not unequal, with one sex superior to the other, but neither are they the same. Myers makes a strong case for the urgent need to get women, with their proclivities for communication, conciliation, and consensus building, into more leadership positions.
From an insider's perspective, Myers presents examples not only from her personal experience as the first woman to be a President's press secretary, but also from the careers of many other women, including Hillary Clinton, Katie Couric, Dr. Bernadine Healy (former Director of the National Institutes of Health), Laura Tyson (as Chairman of the President's Council of Economic Advisors), Alexis Herman, (as U.S. Secretary of Labor), and Diane Feinstein (U.S. Senator from California).
The author is careful to point out that all such discussions must recognize that the subject isn't about individual men and women, but differences in general between men and women. She also condenses nicely a review of the known proximate causes for male/female differences in behavior, viz. differences in brain structure and hormones.
Throughout the book she provides fascinating descriptions of now well understood ways women differ from men. Some examples:
All of the above traits, Myers points out, are assets of mind and inclinations that women can bring to our social life if what we seek is civility, efficiency, and productivity.

But what about ultimate causation? Many people feel intuitively that women are different from men, and studies are documenting the many ways in which they are different. Based on these differences, people like Myers urge us to put women in leadership positions. But why are women different? The argument for any cause is strongest when based on solid ground, not wishful thinking or gut feeling or just plain guesses.

To explain the root cause for the traits women demonstrate, Myers quotes Louann Brisenden (The Female Brain): "To forge connection, to create community, and to organize and orchestrate a girl's world so that she is at the center of it ... to protect what's important, which is always, inevitably, relationship (p. 141)."

It's true that forging and maintaining relationships is something at which women excel more than men, and I agree that doing so is central to explaining much of women's behavior. It is, however, still only a proximal explanation. Myers' argument would be even stronger if she delved a bit deeper. As an evolutionary biologist I ask, "why is fostering these tight relationships so important to women? Why has nature built that desire more strongly into women?"

My answer is that it's because forming tight, reliable bonds is one trait in a suite of traits women possess that foster social stability within the community where they're raising children. Socially unstable environments are dangerous both to the mothers and to their children. Other traits women have also serve the same function of creating stability, most notably a preference for using negotiation and accommodation to solve problems rather than physical conflict (traits covered by Myers) and a strong predilection for prospicience (forward looking and forward planning). A preference for social stability is not nearly so well developed in men. In fact, much of male biology is slanted toward overturning the social order, even if it involves using violence, as a means to rise in dominance or maintain their dominance status within the community (see the essay Biological Differences Between Men and Women With Respect to Physical Aggression and Social Stability).
Myers has a chapter on war. She points out women's stronger aversion to violence, their preference for negotiation, their strong sense of empathy, their communication skills, and so on. All of these traits are reasons, she says, why we need to get more women at negotiating tables and involved in making decisions that might avoid creating conditions that lead to war in the first place.
​
Most of her examples, however, relate to how women could improve public life. Her marshalling of facts supports a female effect on issues ranging from more efficiency and honesty in government, to greater profitability for corporations that go out of their way to make a place for women, to greater concern for "women's issues" such as rape and child abuse, to concerns over environmental protection.
Within the book's ten chapters, she also covers some of the remaining barriers, both personal and societal, to women's full participation in leadership roles.
In the final chapter, "Reaching Critical Mass," we learn that it takes more than one woman to change a group's dynamics: a token woman here and there doesn't make a significant difference. For example, it takes 3 women to change the dynamics in a board room. When a political deliberating body reaches roughly 1/3 politically independent women, there is a notable shift in dynamics and priorities.

Why Woman Should Rule the World isn't about male bashing, and it has no negative spirit. In fact, using "rule" in the title may have been the marketing department's decision. Myers isn't arguing that women should rule exclusively, but that it's a criminal shame and waste that we are not fully utilizing their talents. As Myers says, "My father is a man. I'm married to a man. I gave birth to a baby man. I think men have done wonderful things, from inventing the wheel (though it may have been a woman's idea, but somehow a man got credit), to walking on the moon….But that doesn't mean the world wouldn't be better if there were more women in public life." (p.11)

I found no new insights in the book—this is an area explored by feminist studies and literature for several decades now—but she draws from her extensive, real-life experiences as a woman trying to succeed in a heavily male-dominated society and uses humor to do it. In addition to her stint at the White House, Myers has been a political analyst, media commentator, and a consultant to NBC's The West Wing. This is the kind of accessible reading that all women and their daughters and men of good will can curl up with, enjoy, and remember.

The book is current and has extensive references, an index, and a good bibliography. The citation of quite recent studies on differences in male and female brains and the behavior correlated with those differences, Louann Brisenden's 2007 book The Female Brain, is one example, as is pointing out that in 2007, President George W. Bush appointed the second female Presidential press secretary, Dana Perino. Citing Hillary Clinton's tearing up in 2008, near the end of the New Hampshire primary, is another example of the book's currency.

For another review of Why Women Should Rule the World, check out a Guardian article: Why women really should rule.

"The thing women have got to learn is that nobody gives you power, you have to take it." - Roseanne Barr, Comedian, Actor and Writer