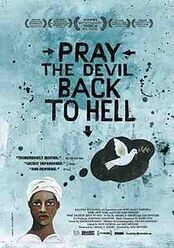 You may wish to view the film once through without pause simply to be inspired. But upon further viewing as a "how to" guide, take time to pause and reflect at places where what is happening illustrates some general principle of either nonviolent action, or what in considered an important principle for waging any positive campaign for social transformation, including as will be mentioned, a campaign to abolish war. ​This 72 minute documentary film is a recent (2003), real-life example of the use of nonviolent struggle to bring about a major, positive social transformation. This story of the Liberian women's campaign has been preserved for us by Abigail Disney and Gini Reticker. The time stamps listed are for the 72 minute home version of the film. For more information about the film see forkfilms.com/pray-the-devil-back-to-hell/.

“Pray the Devil Back to Hell” is the story of how an entire country went from madness to sanity, prodded by women who would not be denied. It’s a marvelous documentary detailing how the everyday became extraordinary, “how ordinary women,” in the words of one of them, “did the unimaginable.” Kenneth Turan, read the full LA Times movie review